As Harry Potter fever is about to strike again it only seems fitting that I do an unintentionally clickbaity blog on the Dark Arts. It’s like magic. 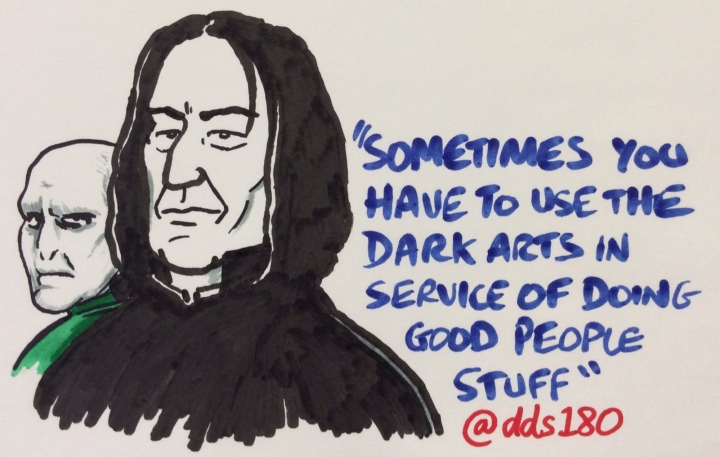 I was lucky enough to do a workshop last week with Rob Briner. The aim was to give some folk the will and the tools to be a bit more structured in the way that they utilise evidence in what they do. I described it as a 3 hour session on using common sense. Some more thoughts from me are here – and if you haven’t seen the Centre for Evidence Based Management’s website you can find that here.

One of the the questions at the end of the session was wonderfully practical, it was ‘My organisation loves fads and quick wins, how could I ever get them to use these approaches?’

This is where I sometimes think we can be a bit more creative and use some smart marketing. Where we can be a little bit disingenuous in service of a bigger win.

My suggestion is that you serve up an evidence based approach (not new or faddish) as the next big thing. Serve it up under the guise of all that is trendy and cool and of the moment. Use all of the tricks at your disposal to make sure your organisation is spending its energy on things that are most likely to make a difference.

In short, I’d do the smart things to get some good stuff across the line and into daily usage in your organisation. Understand and deploy the Dark Arts in a good cause.

The CIPD are doing more work over the next year on ethics. I think I’m ok on this one – I might not be. I just know that time is the most precision of organisational resources and the most precious in your career. So when you are thinking, rather than reacting, that has to be good. A little darkness in search of the light.

I always think HR should be relentlessly pragmatic as well as aspirational. Critically assessing evidence is key to that.

Credit for the picture as always to the exceptional Simon Heath

4 thoughts on “Defence of the #HR Dark Arts”