During the week I spent a fair bit of time talking about HR, metrics and behavioural science. This weekend I slumped down in front of the TV to catch up on Last Week Tonight with John Oliver which, together with The Daily Show, forms part of my regular sanity check on life. Reflecting on the programme has given me another of my strange organisational tests (to add to the Room 101 test and the Beermat Test). This is the Ocean Spray test.

Part of the challenge of dealing with metrics is context and helping people to effectively gauge the comparative size of the problem they are dealing with. If I tell you that a certain action will double your risk of something that immediately sounds like a big impact – particularly if it is health related. If you want to see an example of this effect (e.g. eating x can double your risk) then pick up today’s copy of The Daily Mail. It really doesn’t matter which day you read this post, just pick up the latest Daily Mail and you’ll find something.

Likewise, if you want to make something less accessible you turn it into something that people struggle to relate to. A good example of this is food packaging. Most of the nutritional information in food packaging is in mg – it only makes sense when we have it translated into recommended daily amounts. Most people don’t really now whether 5mg of something is good or bad.

John Oliver focused on sugar being added to products and suggested we would best understand the impact if units offered to consumers were either teaspoons or peanut based sweets. So if you picked up a sweet drink you could immediately see the comparator to something you may normally avoid. That health drink is the same as 5 sweets? I’ll have some water…

I liked the idea of choosing units that we could immediately apprehend. Food manufacturers in the US are campaigning against the changes – you’d be surprised as to how much sugar goes into everyday products. As part of the debate into labelling Ocean Spray have admitted that nobody would drink drink cranberry juice without sweetener as er… cranberry tastes horrible until you add copious amounts of sugar. They would therefore prefer not to change the labelling… They are essentially arguing to keep the number inaccessible in case people make different choices.

So what does this mean for data in the workplace? Well it means that there is power in comparisons. I was speaking to someone from an organisation who put their training budget into this perspective ‘we could buy Abercrombie and Fitch each year’. Actually having checked it out it would be 2 times their budget, but even so… it gave a great sense of scale of a very big number.

We regularly see CEO packages explained in terms of multiples of average wages and I was pondering on whether the average wage might be an effective standard unit for business cases. Give me an idea of how many people I could hire or support for the amount of money that you’d like to invest in your project. Let me understand how much that IT system costs vs. another unit that I could readily understand.

The advent of the infographic means that this is easier to do than ever before – don’t just give me a number, show me a visual.

I saw this recently as a nice example designed to help people convert units. A handbag is a day of care from a cancer nurse. Power stuff. 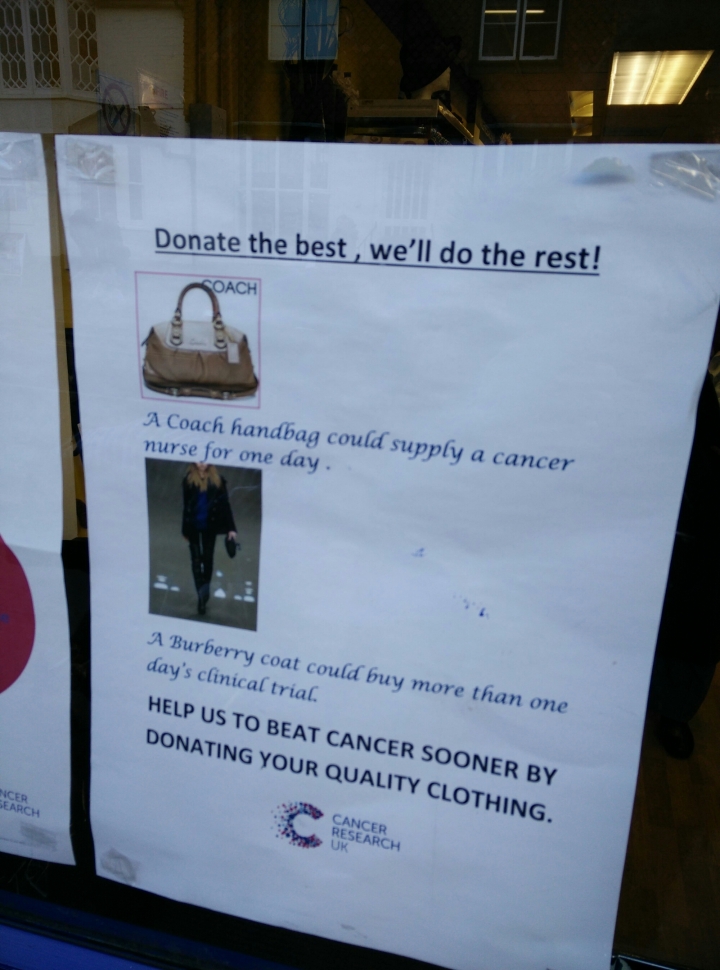 I wonder how many business cases would have been rejected (or accepted) if something more relatable than ‘almost unimaginably large sum of money’ was the unit of measurement.

So the Ocean Spray test is this. Ask of any business case you are presented with

does the opportunity cost of project, if expressed in terms of an easily understood unit (e.g. average salary multiple, amount of bonuses we won’t be able to pay) warrant the investment?’

6 thoughts on “The Ocean Spray test – sweet and sour”